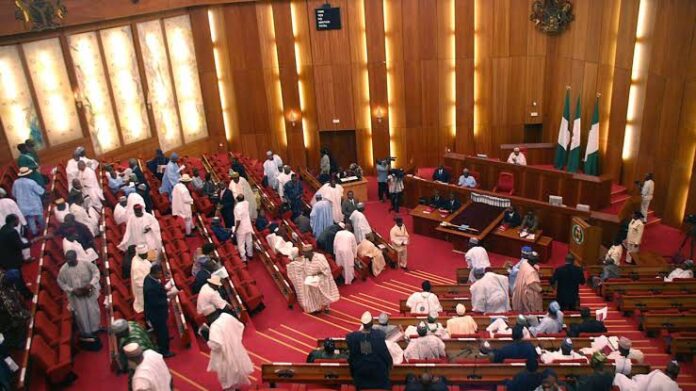 A bill that seeks to establish an agricultural development fund scaled third and final reading at the Senate on Tuesday.

The bill titled ‘A Bill for an Act to establish the National Agricultural Development Fund and matters connected therewith, 2020, is sponsored by Senator Abdullahi Adamu (APC, Nasarawa West).

Passage of the bill was a sequel to the consideration of the report of the Senate Committee on Agricultural and Rural Development.

The legislation was first introduced to the Senate in November 2019 and was read for the second time in March 2020.

The bill seeks to establish the fund for the purposes of providing sustainable funding for agricultural development in Nigeria taking to address food production, food security, economic diversification, job creation and international competitiveness of the agricultural sector in Nigeria.

The fund, according to the sponsor, would provide an emergency support fund for agricultural control rural access to financing of a transboundary animal disease outbreak; support service through microfinance and collaborate with development partners to support food security and agricultural modernisation and competitiveness.

Other sources include concessional loans, borrowing from international capital markets and sovereign borrowing.

Some objectives of the Bill include to improve ‘institutional capacity for enhanced agricultural productivity, income, employment, accessibility to quality inputs and outputs markets through research, innovation, technology upgrading and extension.

It is also aimed at developing human and natural resources for sustainable production and value addition and promoting the evolution of commodity markets, commodity exchange and market-driven aggregation centre for effective link with the industrial and international markets.

Presenting the report, Adamu, who doubles as the chairperson of the committee, said the Bill is apt as it comes at a time when the federal government is making effort to diversify the economy.

“The bill, when passed into law, will create employment for our teeming youths,” he said.

A few lawmakers took turns to make their contributions supporting the bill.

In the committee of the whole, the senators considered the bill clause-by-clause. The bill was ,thereafter, read for the third time and passed.

It will be sent to the House of Representatives for concurrence and thereafter transmitted to the president for possible assent.