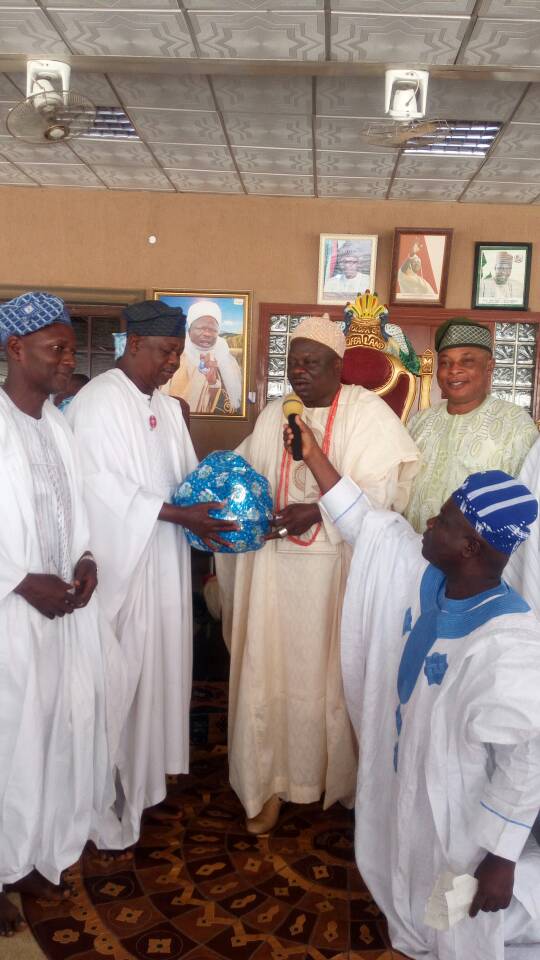 The leadership of Nasrul Lahi l Fatih Society, NASFAT has been charged with the task of urgent development of its property at Aseese along the Lagos Ibadan Express Way.

The advice was given by the Olofa of Offa Oba Miftaudeen Gbadamosi ESUWOYE II during a courtesy visit by the President of NASFAT Engr Kamil Bolarinwa to his palace over the weekend.

In his speech the Oba Gbadamosi noted that he observed that there is a weak presence of Islamic Organisations along the Lagos  Ibadan Expressway for which reasons he charged  NASFAT to live up to its vision as a pace setting Islamic Society.

President Bolarinwa paid the courtesy visit as part of his itinerary on a four day working visit to the Kwara Zone of the society.

Earlier Engr Bolarinwa had paid similar courtesy visits to the palace of Elerin of Erin ile Oba Abdulganiyu Ajibola Olusokun II as well as the palace of Onijagbo Oba Salaudeen Fagbemi and Oba of Ajase ipo and Olomupo all in the same axis.

The NASFAT President’s tour of Kwara Zone commenced  in Ilorin with an interactive session with the Stakeholders of the Society.

The meeting afforded Engr. Bolarinwa a first hand information about the issues of development and management in the Kwara zone.

Earlier a strong delegation led by the Vice President of the Society, Barr. Alh. Sulaimon Fagbemi had received the President at Ilorin Intl Airport with a lot of funfare.

In his keynote address during the interactive session which took place at the Ilorin main branch of NASFAT Engr. KAMIL BOLARINWA expressed his gratitude to the leadership of the zone for the various impactful projects accomplished by the zone.

He also promised to address all the issues raised at the forum with dispatch.

The working visit of President of NASFAT came to a climax with the inauguration of the latest branch of the Society in Ijagbo. In his charge to the newly sworn in Zonal and Ijagbo new branch executive Engr. Bolarinwa charged all of them to fear Allah in the discharge of their duties.

The colourful event was conducted in the presence of the Onijagbo of Ijagbo Oba Salaudeen Fagbemi and other stakeholders.

The Chairman of the event Abdullateef Fagbemi SAN advised the new executive to strive to further promote Islam through their activities in NASFAT.

The guest lecturer at the event the Chief Imam of OFFA Sheikh Muideen Salman Hussein gave a thought provoking lecture on the essence of spending in the course of Allah.