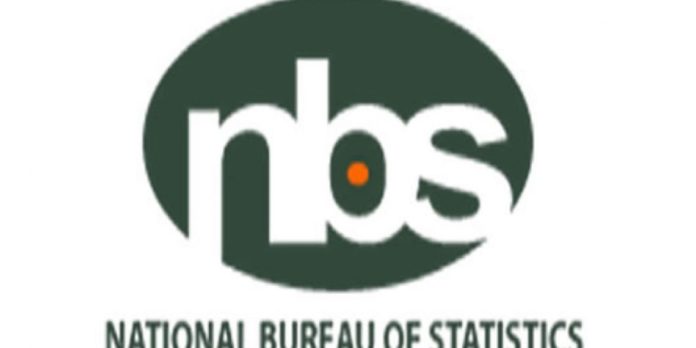 Nigeria’s Gross Domestic Product grew by 1.87 per cent (year-on-year) in real terms in the first quarter of 2020.

The National Bureau of Statistics disclosed this in its ‘Nigeria’s Gross Domestic Product’ report for the first quarter of 2020 on Monday.

This performance was recorded against the backdrop of significant global disruptions resulting from the COVID-19 public health crisis, a sharp fall in oil prices and restricted international trade.

In the second quarter of 2019, Nigeria’s real GDP at basic prices grew by 2.12 per cent on a year-on-year basis. Growth accelerated further in the third and fourth quarters by 2.28 per cent and 2.55 per cent respectively.

Compared to the second quarter of 2018, the performance in 2019 indicated an increase of 0.61per cent while the third and fourth quarters were 0.47 per cent and 0.17 per cent higher respectively than the corresponding quarters of 2018.

For the quarter-on-quarter assessment, real GDP growth was –14.27 per cent compared to 5.59 per cent recorded in the preceding quarter.

In the quarter under review, aggregate GDP stood at N35.65tn in nominal terms.

This performance was higher when compared to the first quarter of 2019 which recorded N31.82tn, with a nominal growth rate of 12.01 per cent year on year.

Relative to the first quarter of 2019, the nominal growth rate was higher by 0.11 per cent but lower than the preceding quarter by –0.32 per cent.

During the first quarter of 2020, an average daily oil production of 2.07 million barrels per day (mbpd) was recorded.

The oil sector recorded a real growth rate of 5.06 per cent (year on year) in Q1 2020, indicating an increase of 6.51 per cent relative to the rate recorded in the corresponding quarter of 2019.

The oil sector contributed 9.50 per cent to aggregate real GDP in Q1 2020, up from figures recorded in the corresponding period of 2019 and the preceding quarter, as the share of the non-oil economy declined.

He said the non-oil sectors that drove growth included the ICT, financial institutions and agriculture which experienced relatively less disruptions.

The sectors that recorded the highest drop, he noted, included road transport and accommodation/hotel industry due in part to the movement restrictions and lockdown in many towns and cities in Nigeria.

“As a matter of fact, the drop in real GDP growth rate would have been more severe but for the moderating impact of the relatively greater tempo of economic activities in the month of January,” Uwaleke said.