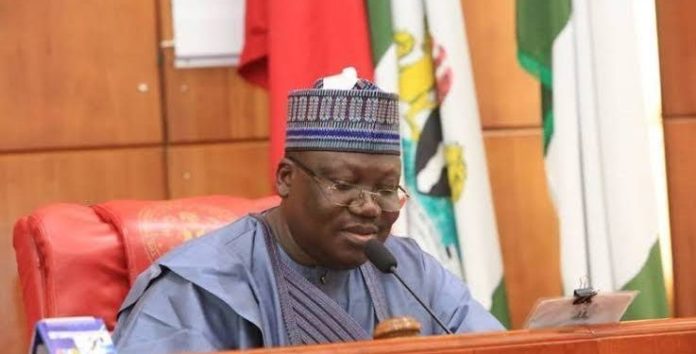 Lawan spoke on Tuesday after he and House of Representatives Speaker Femi Gbajabiamila met with President Muhammadu Buhari and Vice-President Yemi Osinbajo at the Presidential Villa in Abuja on the proposed increase in electricity tariff.

The Nigerian Electricity Regulatory Commission (NERC) had announced that the new price regime for electricity consumers would start today.

In a statement on Monday, the National Assembly had said its leadership had agreed with the DisCos to suspend the planned increase.

Lawan, who addressed State House correspondents after meeting, said the increase was untimely as necessary parameters should be on ground before such hike.

“The joint leadership of the National Assembly sat yesterday with the DisCos and Nigeria Electricity Regulatory Commission (NERC) and we believe that it is not the right time to increase the tariffs in the electricity today.

“Nigerians have a lot of challenges to bear because of COVID-19 pandemic and the situation requires that we should do everything possible to make life easy for our citizens. Of course, government is doing a lot in this respect.

“We believe that the DisCos should continue to engage with their consumers, find better cost reflective tariff. But before then, there must some steps to ensure that the consumers are properly metered.

“Otherwise, you will still be guessing what consumers are consuming; that is to say, let the billing be very scientifically based. It has to be based on what you actually consume.

“So, we had this discussion with the Vice-President and we are sure that the announcement of an increase in electricity tariff in Nigeria is untimely.

“We believe that we need to do more work to ensure that before any increase, there must be some measures; some steps and some line of actions that must be exhausted, including the metering. This is a welcome idea to the Vice-President as well,” he said.

Lawan noted that to stabilise power supply, the Share Purchase Agreement signed between the Federal Government and the DisCos at the point of privatisation must be adhered to.

Gbajabiamila said all the parties agreed that there was need for cost reflective tariff, which must be done at the appropriate time.

The Speaker said when there is a major policy decision, it is always good that the Executive and Legislature are on the same page, hence the need to meet the Vice-President.

He said the National Assembly leadership had earlier met with President Muhammadu Buhari on the mater.

The President agreed with the leadership of the National Assembly to prevail on the DisCos to suspend their planned electricity tariff hike.

The leaders of the federal legislature said they met with the President to make him consider the time factor in the price hike.

Gbajabiamila said President Buhari and Prof. Osinbajo were on the same page with the National Assembly leadership on the deferment of the tariff hike, given the effects of the COVID-19 pandemic on the people.

“We have all agreed to suspend this for a while, tarry awhile and get the buy-in of the people, explain to the people why this has to be done, that it is, for the betterment of electricity to get stable.

“The DisCos and GenCos are businessmen and cannot be undercutting themselves.

Also, Association of Nigerian Electricity Distributors (ANED) has said the suspension of proposed service reflective tariff was initiated by the National Assembly due to their concerns on its timing.

Its Executive Director for Research and Advocacy, Sunday Oduntan, announced this in a statement yesterday in Abuja.

“Members of the National Assembly are representatives of the people. Based on the feedback they had been getting from their constituents, mainly around the difficult financial realities, they called for a meeting which we attended, and during the meeting, they laid out their concerns.

“DisCos have spent the last couple of weeks carrying out massive sensitisation across different platforms, preparing their customers for the new service reflective tariff as instructed by the NERC.

“DisCos have also been at the forefront of the calls for a reviewed tariff for years,” Oduntan said.

He added: “Based on the recommendation of the National Assembly leadership, the new regime should now take effect from the first quarter of 2021.”

The Senate on Tuesday asked the Federal Government to subsidise electricity for Nigerians to reduce the effect of the proposed hike in electricity tariff.

The Chairman of its Committee on Power, Gabriel Suswam made the call while addressing reporters in Abuja.

He said: “Nowhere in the world is power not subsidised, especially in developing economies, because there are genuine people, who, because of their income, are unable to pay what is called cost-reflective tariff.

“Nigerians are heavily burdened because of COVID-19. The economy has contracted by 3.2 per cent. That’s a lot.